Lim Hyunjung was born in South Korea, and lives and works in Paris. She is drawn to objects as embodied experience. Her method consists in grasping objects by analyzing what we do with them and where we use them, and then re-creating them by bringing together these de- constructed elements. This work of re-composition allows her to demonstrate to what point the essence of every object we experience exists in different space-time dimensions, and has different profiles accordingly.

“Banality gives a base from which different experiences and archetypal symbols may be made to coexist. It is merely situated in a place that is relatively different from the particular experience. Small insignificant objects in our everyday life and tightly bound to our sense of reality. An object is capable of representing by association something we wish for, or of generating another desire. Thus the notion of an object can reveal to us our background thoughts.” – LIM Hyunjung

Aware that only shapes of identical form can be utilized for a flat assemblage, the Korean artist Lim Hyunjung brings together in her piece hexagons and pentagons in a polyhedron of which the many-sided sphere evokes the sewed-together leather pieces of a ball rather than the surface of the nocturnal heavenly body “Moon, Night”, 2013. This same model, composed of 32 motifs sourced by the artist from a variety of western countries, yet evoking visually the floral allure of Muslim aniconical art, takes on the curious title of « Moon, 32 different moons », 2013. It is as if the rounded belly of the full moon had 32 female feotuses bursting like flowers from its sur- face, the star that waxes and wanes being the luminous symbol of both emptiness and fullness.

What draws our attention in the consideration of the object as that which unites the space of “exterior” and that of “interior” is not the reference to Islamic culture, but rather the unfinished installations that Lim Hyunjung creates in an approach that might be likened to a decorative one. The structure appears inspired in the traditional methods of tapestry, but with an approach such as used for friezes made of horizontally woven strips, producing a triangular form at each extremity, shapes with mottled motifs and composed of tiny pearls of different colours. And yet below the curtain of colour, the lower section of the work is deliberately left in suspense, unfinished. Sculpture, tapestry, or a combination of the two? We are before a sculpture that proposes a simalcrum. 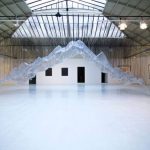 Over the past two decades, artists from the Far-East have been the object of a selective attention. Either in solo shows or group exhibitions, they have frequently featured in both private and public spaces.